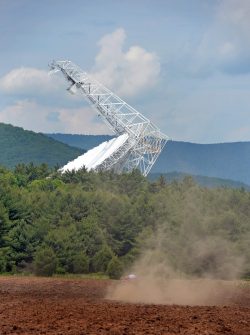 Better known for probing deep space to study the nature of gravitational waves, discover the presence of molecules that could potentially support life, and search for the presence of extraterrestrial intelligence, the Green Bank Observatory has added a more down-to-earth research role to its repertoire: potato production.

On Thursday, the last of six five-acre plots on a stretch of level land between the Observatory’s headquarters building and its iconic 100-meter Green Bank Telescope was seeded with potatoes. The work, done by six teams of Pocahontas County farmers using a state-owned planting machine, is part of an effort by the West Virginia Department of Agriculture to encourage growers to consider the lowly potato, which once had a much higher profile across the state, as a new cash crop.

Records show that in 1927, West Virginia’s best year for agricultural production, about 53,000 acres were devoted to potato production statewide, compared with less than 1,000 acres today.

Published by The Charleston Gazette.  See more at: http://www.wvgazettemail.com/news/20160605/green-bank-observatory-sets-sights-on-a-new-generation-of-spuds#sthash.zDTCAV2S.dpuf