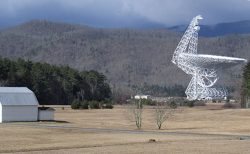 When leaders of the Laser Interferometer Gravitational-wave Observatory, or LIGO, announced in February the first-ever direct detection of a gravitational wave, astrophysicists Scott Ransom from the National Radio Astronomy Observatory and Andrea Lommen at Franklin and Marshall University in Lancaster, Pennsylvania, had mixed feelings.

On the one hand, it meant that the team they and others lead, which searches for gravitational waves using radio telescopes aimed at special stars called pulsars, would not score the first detection. “We loved the idea of being kind of a dark horse,” Ransom admitted.

On the other hand, they were thrilled for their colleagues at LIGO—and for gravitational wave astronomy. “I was really excited, for a whole day I think, before I got jealous,” said Lommen. “We’ve all been working in this field that’s had no detections for 20, 30 years—and now we have a detection. People can no longer make fun of us.”

Above all, Ransom, Lommen and their colleagues hope that, like a rising tide, the excitement around the finding will boost all gravitational wave research—including their own.

Published by Inside Science.  See more at: https://www.insidescience.org/content/some-einsteins-space-time-ripples-have-yet-break-their-silence/3811