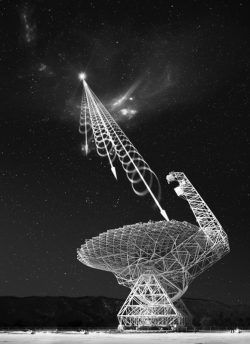 For the first time, astronomers have traced an enigmatic blast of radio waves to its source.

Since 2007, astronomers have detected curious bright blasts of radio waves from the cosmos, each lasting no more than a few milliseconds. Now scientists have been able to pinpoint the source of one of these pulses: a galaxy 1.9 billion parsecs (6 billion light years) away. It probably came from two colliding neutron stars, says astronomer Evan Keane, a project scientist for the Square Kilometre Array (SKA). Keane, who works at the SKA Organization’s headquarters at Jodrell Bank Observatory outside Manchester, UK, led the team that reports the detection in Nature.

The discovery is the “measurement the field has been waiting for”, says astronomer Kiyoshi Masui of the University of British Columbia in Vancouver, Canada. By finding more such fast radio bursts (FRBs) and measuring the distance to their source, astronomers hope to use the signals as beacons to shed light on the evolution of the Universe.